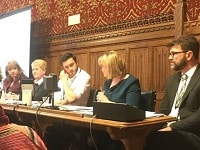 Have you ever wondered what goes on in an All Party Parliamentary Group? Should you be attending them and, if so, what can you expect? What will you get out of it? Read on to find out the answers to these questions and discover some powerful new statistics that will shock you.

We’ve been pushing the Cultural Inclusion manifesto to politicians, cultural organisations and opinion formers over the last couple of weeks. All this activity has resulted in numerous new individuals and organisations signing up to support us. Sophie Leach from the National Society for Education in Art & Design (NSEAD) was one of those who went on our website to sign up to the manifesto.

We contacted Sophie to tell her more about the manifesto and what we were doing to promote it. She kindly invited us to the All Party Parliamentary Group for Art, Craft & Design in Education so we could find out more about what they do, meet some key politicians and hear about some powerful new research. We had already written to all the politicians from that group, and thought it would be an excellent opportunity to talk with them face to face, so we promptly bit her hand off!

The meeting was chaired by the wonderful Sharon Hodgson MP who is a passionate advocate for the arts and culture in education. She had attended an inclusive arts festival at the Lyric Hammersmith a couple of years ago and spent a lot of time chatting to the disabled children, their families and the teachers who had worked hard to make it happen. So, when we developed the cultural Inclusion manifesto she was the first politician we contacted. She did not disappoint and, as well as signing up to the manifesto and providing an excellent quote, she also agreed to sponsor a launch event in Parliament later this year.

It can be quite intimidating to walk around Parliament and, in particular, to enter one of the committee rooms. The rooms themselves are incredibly imposing and they are filled with politicians whose support is vital to your work. So, seeing Sharon’s smiling face put us at ease. We were then offered seats by Baroness Nye, one of the Vice Chairs who had already signed up to the manifesto and provided a great quote. We were definitely feeling more at home now.

It is easy to assume that these meetings are somewhat formal and stuffy. This was not the case for this All Party Parliamentary Group which had a warm and friendly feel. It would also be easy to fear that such groups are merely talking shops for politicians who are often accused of being fond of their own voices. Again, there was none of that here!

What we got was a full agenda of exciting and informative presentations from a range of individuals who all had something unique and valuable to contribute. We heard from:

What we found out

We learnt a lot from the contributions including some shocking statistics:

We also found that children and young people themselves are the best advocates for the arts and culture in our schools. The primary school pupils were eloquent and engaging in a way that adults could never replicate.

What we got out of it

We felt that we got a lot out of attending the meeting including:

That’s a lot to get out of two hours! We will definitely be going back for more and would recommend attending to anyone with an interest in art, craft and design in education. The next meeting is on Wednesday 16th of May between 4 and 6pm and if you’re interested in going along you can contact Sophie Leach at NSEAD- sophieleach@nsead.org

Some final words of inspiration

The meeting ended with a quote from the recently deceased Stephen Hawking:

“Remember to look up at the stars and not down at your feet. Try to make sense of what you see and wonder about what makes the universe exist. Be curious. And however difficult life may seem, there is always something you can do and succeed at. It matters that you don’t just give up.”