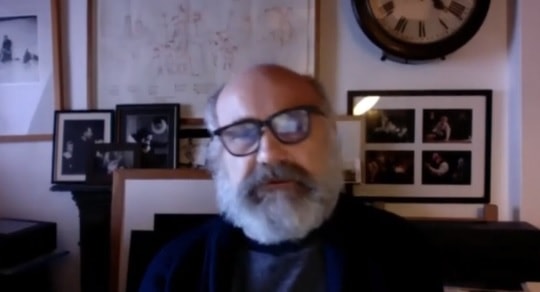 Stephen shares the joy of living with his severely learning disabled son and warns of the dangers of negative language surrounding disabilities and the impact this has on wider society.

The conference on the 26th February 2021, brought together disabled people, parents, disability organisations, schools and arts and culture organisations to explore access to culture and heritage. Given the events of the previous 12 months the conference also explored: How has COVID affected opportunities for the inclusion of disabled young people in arts & culture?

Stephen is a very experienced theatre and opera director, who has been Chief Executive and founding Artistic Director of two very successful theatre companies: English Touring Theatre (1993-2008) and the Rose Theatre Kingston (2008-2015).  Stephen has written eight books on theatre and drama and his first play, All Our Children, was performed in London and New York. Stephen has taught in universities and conservatoires in Britain and the US. He is the father of a profoundly disabled young man and is a passionate advocate for the rights of the disabled, especially people with learning disabilities. Since 2016 Stephen has been Chairman of KIDS, a national charity for disabled children. Stephen also identifies as disabled himself.

The manifesto referred to in Stephen's speech can be seen here: Writing about people with Learning Disabilities. A Manifesto. — Stephen Unwin

See the conference programme and all speaker biogs here

Audio description: A man with a full grey beard and bald head faces the camera. His head and shoulders are visible and he is wearing a black jumper and black framed glasses. Behind him is a large round wall clock and many framed photographs and artworks.

So, I'm Stephen Unwin and I've worked as a theatre director, run theatres and worked in Opera and written lots of books for about 40 years too long - grey beard, but I'm also the father of a young man with severe learning disabilities, intellectual disabilities. 24, has no speech. Is not autistic. So it's not that group. And I just wanted to tell you some stories and some thoughts I've been having.

But I'm going to start with Twitter. Now, as everyone who use it knows Twitter is a cesspit, it's a place to get shouted at by strangers, bark into the void, and fight off anonymous trolls. So you can imagine my surprise when a jokey little tweet of mine set off an enormous wave of love, pride and the best in humanity.

It was the afternoon of New Year's Day and I was lying on the sofa with my 24-year old and we were giggling at one of our routine jokes. I took a few quick selfies of us having a cuddle, was pleased with one of them and tweeted it out with the simple deeply ironic message "so terrible being the dad of a learning disabled young man."

I thought nothing more of it until I returned to my phone and saw a steady stream of notifications likes, comments, retweets and so on. But I was especially struck by the hundreds and hundreds of pictures pouring in of families with a learning disabled relative doing happy ordinary things - climbing mountains, walking on a beach, bouncing on trampolines, posing in Christmas pyjamas. Laughing, smiling and having fun.

And prompted by my original tweet each carried its own pithy little message of mock gloom. "Another day of misery", "Awful sadness", "Such dreadful hell", and so on. And I decided to reply to each one of them with mock sympathy, "Oh, how awful", "So grim", "Thoughts and prayers" and so on. And so for three frantic hours on Friday evening I could hardly keep up. And when I woke up on Saturday it was still going strong. By Monday morning I was on the Today programme talking about what had happened and what I thought it meant.

Now, while I don't put much store by Twitter likes and retweets it was clear that Joey and I had somehow struck a chord. And this is because families of learning disabled children, and disabled children, are so often made to feel that their situation is deeply tragic, that I think my tweet encouraged them to show that they don't just love their child to the moon and back, but more importantly perhaps their child has taught them more about life and love and laughter than other people might expect. And they wanted to express that in public.

These families, I think we're reacting to what is often called the tragedy model and I think it's hard wired in our culture and our Society and it starts early. The birth of a disabled child is so often regarded as a sadness. We even see it in the language surrounding pregnant who are women told of the risk of giving birth to a child with Down syndrome.

And when a disabled child is very young parents, perhaps mostly middle-class parents like me, are told to downgrade their expectations. Voices whisper in our ear about the dangers of denialism. There's even a piece of advice that we should think of it that we booked a holiday in Italy but found ourselves in Holland instead. It's a piece of advice I rather hate actually, and that we should enjoy the tulips and windmills instead of the Trevi Fountain or Mount Vesuvius. Well, being Joey's Dad has been a lot more like Mount Vesuvius, in all its splendour, than being in Holland.

And then we find ourselves involved in years of struggle for a decent education, care if it's needed and housing. And we quickly discover that the only way of securing the support we need is by emphasising the negative. You have to say that your child is really really really bad at things before they get the human rights that everybody else deserves so readily. I even found myself saying to a bureaucrat that if Joey died of epilepsy, which was possible, she would be responsible because she hadn't taken the right action.

And it takes it out of you this stuff and of course all the time we are reminded of just how expensive our children are. And now in the middle of this pandemic in which young learning disabled people are 30 times as likely to die of Covid-19 as their non-disabled peers, we discover that do not resuscitate orders have been slapped on them. And we've all had to fight with whatever we've got for them to be vaccinated. And even in the fight for vaccination just now it was only the most negative language that seem to cut through and persuade the politicians to change their practices.

So it sometimes feels like we're having to fight for basic human rights for learning disabled people, especially those with disabilities like my Joey. I think all goes back to public attitudes and this is where culture comes in, but not just high culture, but everyday culture.

There's not a day goes by when I don't hear people using the vile language of abuse to indicate disagreement, so-and-so's a "moron", a "cretin", a "retard", an "imbecile", an "idiot". Now these were all words that I've been researching, that we use to segregate, depersonalised sterilise and even murder people who are thought to represent a danger of one kind or another because of their intellectual capacity, or lack of capacities.

When I object I've noticed that people get ready angry with me as if I'm denying their fundamental human rights to call people "idiots". All I know is that every time I hear that language a little part inside of me dies.

And what is so often forgotten is just how creative, enjoyable and anarchic sharing a life with a learning disabled person can be. And while I reject the pieties that special parents get special children or that god sends disabled children to make the parents better, I know that my Joey has had a hugely positive impact on me, and the rest of his family.

The point I want to make is that loving Joey and loving people like Joey is the easy bit, he's no tragedy. It's fighting for his future which hurts. The fact is that we live in a culture that privileges a very narrow notion of intellectual excellence as the single most desirable quality a human being can have.

The unexamined life is not worth living declared Socrates, what kind of argument is that? The English philosopher John Locke struggled with the idea of including those who can't speak among the human. And more recently liberal progressives Bernard Shaw, John Maynard Keynes, Virginia Woolf and so on were eager supporters of eugenics. Richard Dawkins tweets that if only we could get over our qualms eugenics should be useful today.

The fact is that every great moment of human progress has a dark side, and that's the place where the learning disabled have been shunted off and forgotten about.

So it's perhaps time that those of us who work in culture, and I've spent my life doing it, started to question this hierarchy of value, not by abandoning our own abilities but by insuring that they don't exclude people who are different, those people, who people like us, have so consistently frowned on.

And that seems to me pretty fundamental to the title of this conference. And so I think cultural representation really matters. And I was glad to hear that reference to representation just now from Paul. And it's in this spirit last year I drew up a manifesto for the representation of learning disabled people and it's been adopted I believe by Learning Disability England and struck a chord when I introduced at last year's conference.

So I hope you'll forgive me for wheeling it out again, but I think it's quite interesting and is perhaps quite useful, it's hardly comprehensive - and I'm nearly finished everybody, so don't worry - but this is what I want to see:

And I think it's time that culture found ways of working with, listening to and representing the defiantly human experience of this long neglected group.

Thanks very much for listening and I'm looking forward to the rest of this conference. Cheers.